Sebastian Matuszewski:
“I decided to risk it all in that lap (I had nothing to lose anyway),
this way I brought the title, together with a huge cup back home, to the sea”

Winning this year’s King of Europe PRO2 Series has already been the second victory in your career? Earlier, in 2016 you also won, right?
Yes, earlier we also managed to take the top spot. After winning the title, we were absent from European circuits for a year, because of our heavily strained budget. Unfortunately, we didn’t find any sponsor for 2017 with the help of whom we could have continued racing abroad, so we were forced to race in Poland only. However, maybe luck was on our side, because in the first round in the previous season, when we were racing on a track in Pszczółki, the engine in our car exploded in effect placing a further strain on our already poor finances, but that’s how it was… 2017 was lost, mainly due to a series of technical problems, largely affected by the perversity of inanimate objects. But now we are where we are and I have successfully proved that one must not give up and a single unlucky year means nothing, cause our ambitions were high all that times. The only way was to rise up and fight. We came back with the title and that counts.

As far as remember, then you also raced against the Bulgarian?
I think, I’m his worst nightmare. Two years ago we met only once in Austria but people still recollect our clash as we had 3 one-more-time battles fighting for the first place in the round, which I finally won. This year, the first round in Austria was exactly the same, though not with 3 battles but only one, so compared to the battles we fought 2 years ago, it went really smooth. I met him for the third time in the double points final round closing the season, also on our favourite race track in Austria and also this time, fighting on every level (also psychological) we ran into each other in the TOP4 semi-final. The thing was, that this really nice Bulgarian  came to Austria as the leader of the overall classification with 40 point advantage, I was second. If I had lost the semi-final against him, he would have sealed the title and I would have had to enjoy the second place, so each of us knew the stakes. After battling on that track, the scores clearly indicated me.  Eventually, I managed to win the third time, but for me, it still didn’t mean the title because I had to win the final to take the title back to Poland.

How many rounds did this year’s series consist of?
This year’s competition consisted of 6 rounds, but the general classification was based on best 3 rounds plus the final round with double points.  That is why we took part only in three of them and the final, so theoretically I could not afford any mistake… but it  happened anyway, one round before the final race in Germany, shattering my big plans for winning the title, especially since I was on a roll after two victories. But there was no time for sorrow. Along with the stress our motivation rose, cause we knew from the experience we gained in the season two years earlier that one has fight to the very end. The same situation was this year … I honestly didn’t believe in winning, and I just went to Austria to prove, that I didn’t give up.

What tracks did you race on?
Twice in Austria  in Racing Center Greinbach, one time in France at Anneau du Rhin circuit and one time at Motorsport Arena Oschersleben in Germany. 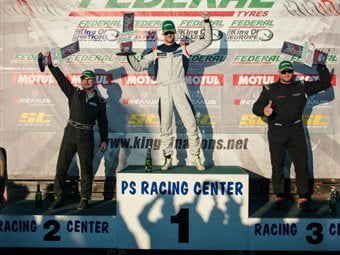 How was the situation in the general classification just before the last round? Can you share some details about the last round?
As I mentioned before, just before the last round I was second in the general classification, 40 points behind the leader. The points are double in the last round, so anything can happen, but knowing the rank of the leader, the odds of winning were low, because my smallest stumble or him getting to the final battle was enough to lose the title. Saturday was a good sign as I managed to win the qualifiers and I felt much stronger.  I was even happier to see that I would probably meet my main opponent in the TOP4, that is in the semi-final. It meant that the chances for the title were still high. On the following day we both showed up at the start line. All I needed was winning the final round. I stood up against a perfectly prepared, homebred driver from Austria, but I decided to risk it all in that lap (I had nothing to lose anyway), this way I brought the title, together with a huge cup back home, to the sea.

So in the end, how many points did you outscore the Bulgarian by?
I didn’t actually outscore him in the end. We had the same number of points. The number of round victories decided on the title. I had three of them on my account, he had one victory less after my triumph in the final. 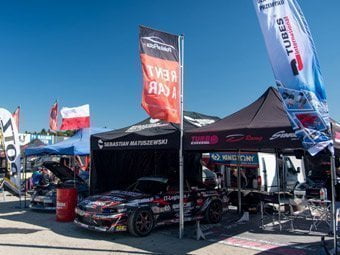 How prestigious are these drifting championships compared to other European events?
The league started 15 years ago. It runs series of drifting championships throughout the world, such as King of Nations, which  bring together drivers from across the globe, where our Final round was at the same time one of the rounds of these series, with some of the best drivers from Japan and Kuwait taking part. The rounds are held on tracks in Dubai, Bahrain or in Europe on the tracks approved for the highest series competitions, so compared to other European events, ours is very attractive. The budget is the limit. Maybe someday I will be able to compete against others in the events all over the globe. It was really nice to come near machines competing throughout the world.

When can we expect your promotion to the league above?
Our promotion to the higher league basically depends on the budget. To enter competition in the higher league one must take part in 6 rounds and the final, which is held in Greece, whereas in my league 3 rounds plus the final were obligatory, so as you can easily count up, it’s only half of the expenses for so called “Pro”. I am ready to go further, but without the support of external companies, it won’t be possible. I do my best to prove, that I always represent everyone who helps me in the best possible way.

What are the costs you have to pay in one season?
The costs are enormous, one trip to enter a round held abroad is about 20000 PLN. Obviously, it’s not only travel expenses. Transport, hotels, tyres, mechanic, photographer, camera operator, fuel, entry fee, car preparation, because being so far from home you can’t afford any errors or any other minor expenses. And it is all based on optimistic assumption that no disaster will happen, as the engine explosion a year ago ….

The costs that we bear are enormous, so without the support from the sponsors I might at best watch such cars on TV, that is why I am truly grateful for the opportunity to fulfil my passion for racing and to express my gratitude with the results I got. Because, to get such results, somebody had to put trust in me first.