Silesia Automotive:
„Some people like climbing mountains, others can’t live without music and dancing.
We have a knack for cars.”

Tubes International: How did Silesia Automotive get started?
Silesia Automotive: Silesia Automotive science circle was founded in 2010 by university students who wanted to start their own project and by the supervisor of the group, Paweł Fabiś PhD. Eng., who still works with us. Soon after the circle was established, a decision was made to focus on building a race car to take part in Formula Student competition, where students from around the world design and build their own race cars according to certain rules and then they compete in an international competition. It took several years to design and build our first race car, marked WT-01, and finally, in 2015 we took part in Formula Student competition in Hungary. In the most important event – Endurance race, WT-01 team arrived 19th, out of 42 teams. In 2016 we raced WT-01 in Italy, and in December 2016 r. yet with another race car, WT-02 “Chachor”, we raced in Australia.

TI: Your team is divided into sections. What tasks are assigned to each of them?
SA: Our team includes mechanical department which designs and builds race cars and another department, which deals with marketing, cost calculation and business plan (these are the disciplines within so called static event). Each of the departments is divided into smaller sections e.g. in the mechanical department there are sections dealing with particular systems of the race car. Each section has a leader. The Team Leader supervises and supports the whole team. I know it looks more like a corporation, yet above all, we are a group of friends, who work together to reach a common goal.

TI: 2017 season is over, can you sum it up?
SA: This season wasn’t lucky for us. It was mainly because, for reasons beyond our control, we couldn’t take part in the competitions we had registered for, that is in Great Britain and Hungary. Anyway, we can draw some important conclusions from what’s happened this year. Based on these judgements we’ll be able to prevent similar problems in the years to come. 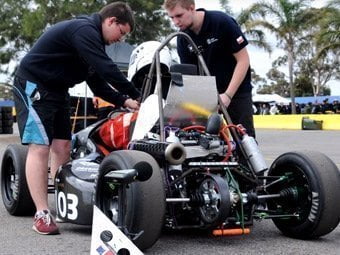 TI: How do you usually prepare for the coming season?
SA: First of all, we have to design and build a new race car, because  according to the regulations, the cars older that one year are not allowed into the competition.  At the same time we search for partners, who will help us carry out the project. We also plan some events, e.g. motor fairs, where we can show our work to bigger public. And naturally, we sign up for the competitions and schedule all deadlines for particular parts of the project.

TI: What are your goals for 2018?
SA: In 2018 we want to start work on our third racing car, WT-03. We aren’t going to take part in the competition. Building the second car took us hardly half a year and probably we would have managed to build our next car in a similar time, but such a pace is too fast for us and we don’t have time to check the construction thoroughly and eliminate all faults and errors. That’s why we decided to take another year. In the first half of 2018 we want to finish the design process to be able to start building the car immediately afterwards.  And since we don’t have to hurry so much, we plan to show up at a larger number of places than we’ve done so far. 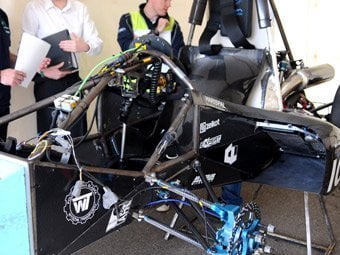 TI: What was the most surprising during your works on the race car?
SA: We are more and more experienced. It seems that less things can actually surprise us. Yet, every team member was amazed at some point of the project – usually by the fact that the very thing designed by this person, often the first design in one’s life, works well in the race car.

TI: What hoses and couplings do you need to build a race car? What are their functions?
SA: Our race car has exactly the same systems as a regular car. However, we need elements designed to withstand race track conditions. That is why, for example, flexible hydraulic hose assemblies for the braking system or clutch and hose assemblies used in both fuel system and lubrication system are in a steel braid, what greatly improves their resistance and by extension, safety.  Banjo bolts are indispensable when it comes to connecting these hose assemblies. When we build the cooling system and air intake system, which supplies air to the engine, we use silicone hose connectors fitted with hose clips.

TI: Why are you so into race cars?
SA: Some people like climbing mountains, others can’t live without music and dancing. We have a knack for cars. And since we were given the opportunity to work on such an incredible project, we wouldn’t be ourselves if we hadn’t challenged it.

TI: Which product that you got from our company would you recommend to other car enthusiasts?
SA: I’m sure that the car enthusiasts will find plenty of products for their vehicles in the stock offered by Tubes International. We strongly recommend PTFE brake hoses in steel braid, aluminium banjo bolts of various angles and many types of silicone hose connectors intended for the automotive industry.

TI: It was really nice talking to you. Thank you.